Winnipeg — (CANADIAN CHRISTIAN NEWS SERVICE) — Signpost Music is pleased to announce the release of the Pilgrim Year collection by author and musician Steve Bell. Published by Novalis Press, the collection of books features written reflections on the liturgical year, accompanied by links to the music of this iconic Canadian Christian singer and songwriter.

“Listening to Steve Bell in concert, you sense his tremendous gift for story-telling,” says Simon Appolloni, Associate Publishing Director of Novalis Publishing. “When you match that with his brilliant musicianship, and his deep faith in a God that loves and cares for justice, it was a no-brainer to approach Steve Bell when he mused to his fans that he was planning to do some writing.”

The boxed set, comprised of seven books, spans the liturgical church calendar from the time of Advent to what is called “Ordinary Time,” touching on all the major movements of the liturgical year.

“I grew up in a Christian tradition that was largely suspicious of the liturgical and traditional,” explains Bell. “And yet, an adult deepening of my own faith has come precisely as I’ve discovered and attended to the rooted wisdom and knowledge of the past which is lovingly embedded in these rich traditions.”

Bell says he wanted to write these books “in a manner that would refresh the weary, and incline the wary to a heritage that is evergreen and fruitful; one that rises above tides and trends, and which fortifies God’s people to be a gift both to and for the world he so loves.”

Pilgrim Year is a prayerful journey through the Christian calendar year. “I hope readers will regain a deep confidence in ‘the story’ that we have been charged to tend and keep for the sake of the world,” says Bell.

Steve Bell is a Canadian Christian singer/songwriter, Juno Award winner, and modern-day troubadour whose vocal style, rootsy guitar riffs and storytelling prowess have won him concerts the world over.

Novalis Publishing produces creative and affordable resources that help people explore their religious heritage, live their faith, deepen their relationship with Christ, pray, actively participate in the liturgical and sacramental life of the Church and to join in the creation of a more just world.

Steve Bell is a storyteller through and through. For 30 years he has offered fresh theological depth and spiritual encouragement to audiences throughout Canada and the United States. Steve has written numerous articles for online and print publications including prominent Canadian Christian newspapers, such as ChristianWeek and Faith Today. He has also penned books on Scripture and the Liturgical Year.

With a vocational calling to “refresh Christian faith and spiritual tradition for the weary and the wary,” Steve is known as much for his award-winning musical career as he is for his storytelling, social commentary and theological insights. His lifelong pursuit of the rich traditions of the church has awarded him a voice in the contemporary recovery of relevant formational practices for personal and corporate Christian spirituality.

Steve pursues advocacy work, both locally and abroad, and has guest lectured at Regent College, Duke University, BIOLA University and Providence University College. He lives with his wife Nanci in Winnipeg, Treaty 1 Territory and homeland of the Métis Nation.

Further information about Steve can be found on SteveBell.com/biography or Wikipedia.

If you are looking for something that’s not here, please don’t hesitate to contact Faye at 1-800-854-3499, or email her at faye@stevebell.com

There are few things more rewarding than a long spiritual discipline of commitment and understanding. The Church’s liturgical year offers a remarkable depth for those who are willing to enter in and truly ponder each season’s meaning. Even better is to have a guide like Steve Bell in the process. By taking his love of story, his poetic brilliance, and his theological depth, he has created something that is indispensable. Pilgrim Year will be affecting sojourners for decades to come. This man can write! He can sing. He can play. But most of all, he can speak to another’s heart. And that may be the most priceless gift of all.
— Matt Baugher
Sr Vice President, HarperCollins Publishers

The rehearsing and reharrowing of the living Story of the living God, who is hopelessly in love with Creation and all its inhabitants, evokes and engenders a transformed imagination of hope. Steve Bell’s Pilgrim Year series invites us to such an imagination.
—Brian Walsh
Author of Kicking at the Darkness: Bruce Cockburn and the Christian Imagination

Steve’s gift of storytelling and attention to church history will help readers enter the mystery and drama of our faith in a fresh way.
—Faith Today
May / June 2019 Issue

Bell has published this series at the perfect time. There seems to be a thirst for ancientness in our current expressions of worship, and Bell taps into that thirst by revelling in tradition and telling old stories in the words of a poet.
—MB Herald, April 2019
Stacey Gleddiesmith, Instructor in worship arts at Columbia Bible College 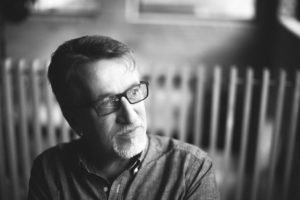 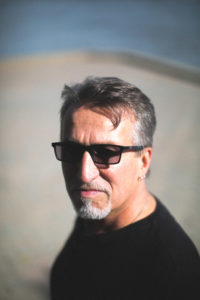 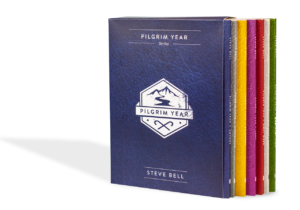 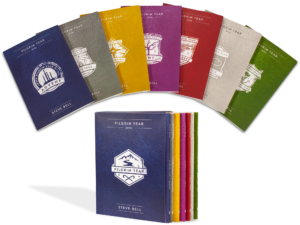 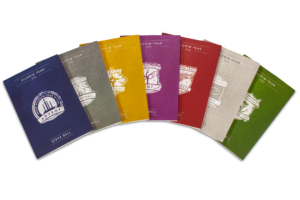 Bell's Pilgrim Year lays out a rich banquet of theology, memoir, poetry and song. The experience of reading, reflecting and then listening, was a bit like being at a really well-developed spiritual conference or retreat.

Craig Terlson
author of Fall in One Day

These meditations combine a scholar's learning, a poet's precision, a musician's imagination, an adult's realism, and a Christian's faith - and faithfulness.

In Pilgrim Year, Steve Bell does something truly remarkable: he brings readers into a deeply thoughtful and creative exploration of the ancient Christian calendar. Readers familiar with the liturgical seasons and readers encountering them for the first time will find themselves caught up in Bell’s use of song, poetry and personal reflection.

The Pilgrim Year series is an insightful and deeply personal walk through the major seasons of the liturgical year. Everything we’ve come to love about Steve Bell is evident here: his warmth, his stories, and his rich theological insight. What a treasure!